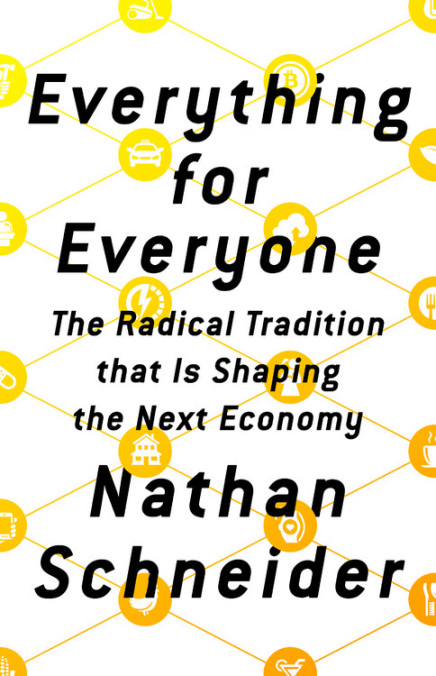 “Everything for Everyone lives up to its title. As Nathan Schneider documents, cooperative movements are everywhere—from Barcelona to Bologna, Nairobi to New York, Jackson, Oakland, Boulder, Detroit, and points in between. And they are struggling to bring everything in common—electricity, healthcare, tech, transportation, banks, land, food, knowledge, even whole cities. Spoiler alert: this is no paean to the neoliberal ‘gig economy’ but rather an historical and contemporary tour of the radical potential of cooperative economics to disrupt capitalism as we know it. It is a book for everyone and a book for our times: read it, share it, but don’t just talk about it. Commons for all!”—Robin D. G. Kelley, author of Freedom Dreams: The Black Radical Imagination

“People have always fought to forge economies based on cooperation and creativity, rather than domination and exclusion. But that work has never looked so urgent as it does today. Charting a wealth of renewable ideas, tools, and commitments that are poised to reinvent democracy, Schneider tackles an immense subject with precision and grace.”—Naomi Klein, author of No Is Not Enough and This Changes Everything

“The time has never been better for cooperative enterprise to change how we do business. This is a guide to how a new generation is starting to make that promise into a reality.”—Jeremy Rifkin, author of The Zero Marginal Cost Society and lecturer at the Wharton School

“Everything for Everyone proves how our vested interests are best served by addressing our common ones. In Schneider’s compelling take on the origins and future of cooperativism, working together isn’t just something we do in hard times, but the key to a future characterized by abundance and distributed prosperity. We owe ourselves, and one another, this practical wisdom.”—Douglas Rushkoff, author of Throwing Rocks at the Google Bus, professor at Queens College

“Nathan Schneider is one of our era’s foremost chroniclers of social movements. Always engaging and analytically insightful, there’s simply no one I’d trust more to guide me through the latest iteration of the longstanding, international, and utterly urgent struggle to build a more cooperative world and reclaim our common wealth.”—Astra Taylor, author of The People’s Platform

“A gifted writer, chronicling the world he and his compatriots are helping to make—spiritual, technological, and communal.”—Krista Tippett, host of On Being 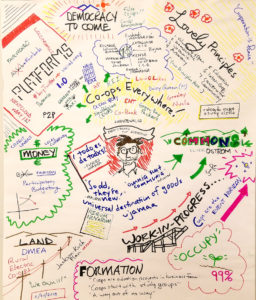 Visual summary of the book by Matt Noyes