The eleventh-century Archbishop of Canturbury, Anselm, wrote on “the great burden of sin”:

If you should find yourself in the sight of God, and one said to you: “Look thither;” and God, on the other hand, should say: “It is not my will that you should look;” ask your own heart what there is in all existing things which would make it right for you to give that look contrary to the will of God. (Cur Deus Homo XXI)

That is: If you could, would you be able to stand not glancing at the face of God? (Notwithstanding Exodus 33:20—”Thou canst not see my face: for there shall no man see me, and live.”) The answer was particularly clear with Anselm, who wrestled his whole life with the effort to comprehend God intellectually, and in the process gave philosophy its most enigmatic proof for God’s existence. But if you don’t see what’s so utterly impossible to resist about seeing God, pick your poison. A beautiful woman or man? Naked? A taste? A loved one who has died? We all seem to have our gods in one place or another, and we all have our temptations.

To me, this is a biological point. Theologians have long looked to biology for evidences of the Fall; all that pooping, copulating, sweating, gobbling, sleeping, aging, and dying that people do hardly seems like the work of an infinitely intelligent designer. Since we are so eager to think of ourselves as better than our bodies really let us be, something must have happened along the way. And since God is good, it must have been our fault. 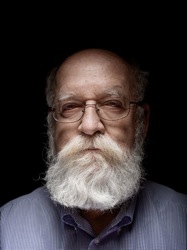 Let’s probe the biology a little further. In his Consciousness Explained, Daniel Dennett seems to reframe the whole problem, drawing on contemporary neuroscience and philosophy of mind, as well as some basic Freud. Rather than following Anselm’s assumption that the conscious will is a cohesive, unitary agent, Dennett believes it is just one among many systems simultaneously at work in the mind. The limit of the will’s control is not a theological consequence of the nature of will itself—or, more theologically, the soul—but a fact of how the mind operates in general. (In fact, such a scheme might invoke Augustine’s sensation in Confessions of being divided against himself.)

Evidence for this is constantly accessible to us. Things in the visual field are constantly being processed without being noticed. Consider, for instance, how your head turns toward someone looking at you (God?) before you realize what it is doing. These mechanisms, as Dennett assumes, come to us through a long line of evolutionary histories.

However we explain it, at some level of analysis, the condition is the same. I cannot resist looking at God. The illusion of control is shown for what it had always been. (Though philosophers have lately asked, if consciousness is an illusion, who is it that is being deluded?) In both cases, I have lost possession of what I call myself. The scientific idea, like the theological one, is deeply humbling. I am not my own. Whatever that means, it is just as true as ever.

When we figure out how to replace religious ideas with scientific ones, the first impulse is often to be thrilled at our power of reasoning and cleverness. With this science-y replacement, it appears, the concept of sin can be gone, along with its weight. Dennett certainly thinks this way, as we learn well enough in his New Atheist treatise, Breaking the Spell. And to a certain degree, it is right. The scientific explanation does capture things that the theological ones doesn’t. But, in its way, the weight of sin remains.